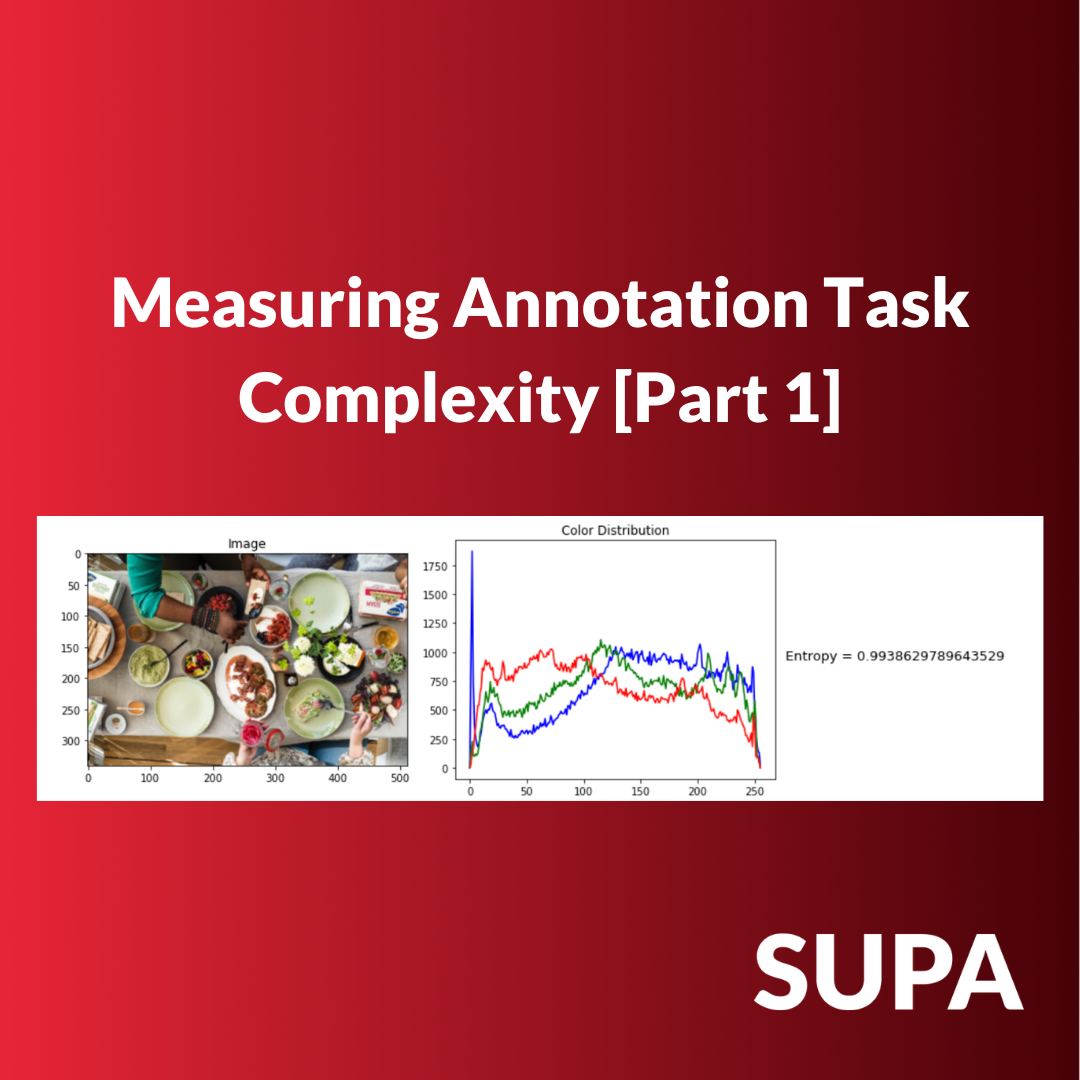 Task complexity score is a numerical value assigned to an image annotation task. This value is normalized to the 0-1 range, with 0 being the easiest and 1 being the hardest.
‍

It's important to be able to quantify the difficulty or complexity of an annotation task so that you can plan your annotation strategy more effectively.

What is required to generate a complexity score?

The algorithm works with image data in order to calculate the complexity score. It works with both annotated and unannotated data, but will compute a score that takes into account a wider range of metrics if provided with annotations/labels. At the bare minimum, this method needs a single unannotated image, but the more images/annotations, the more accurate the measure of complexity.

How is project complexity measured?

The complexity generated is the sum of weighted metrics captured from the image and annotation data.

These metrics can be broadly divided into the following three categories:

The metrics captured in this section examine the unlabelled image data. Whether or not annotations are provided, these three metrics only require - at minimum - a single image in order to be generated

The entropy of an image represents the amount of information/randomness in the image. The more unpredictable or noisy an image is from one pixel to the next, the higher the entropy of that image.

The entropy of an image is calculated by the following equation:
Let p = the normalized image histogram counts, with 0’s filtered out. The entropy is then:

In order to obtain a normalized entropy that can be used to compare different image types across different tasks, the maximum entropy is calculated and the computed image entropy is normalized to the 0-max(entropy) scale.

Below are some examples of images from public datasets, along with their corresponding entropy scores.

The entropy thus captures the amount of noise in an image, and this matches the intuitive visual assessment in many but not all cases.

Mismatches between calculated entropy and visually-judged noise can be due to shadows, glares, slightly different shades of colors that may not be picked up by the eye, uneven lighting, fuzziness/blurriness or items with rich textures, etc. The lighting and blur noise are picked up by the next two metrics, and color differences are examined further on, thus balancing out most false high entropies in the overall complexity score.
‍

Through our research, it was found that a repeated cause of project complexity was a high number of blurry images. To this end, a blur detection algorithm is used to count the number of images in the sampled set that are ‘blurry’.

To detect blur, variation of the Laplacian is used by convolving the image, in greyscale, with the following kernel:
‍

The Laplacian highlights regions of the image containing high intensity changes, and as such is used to detect edges. When the generated result is low, it signifies low variance between different regions of the image in terms of edge/non-edge distinctions, indicating a higher possibility that the image is blurry.

After experimenting with different thresholds, the blur threshold was set at 400. Below are examples of images classified as either blurry or non-blurry according to this algorithm.

Another commonly reported problem are dark images that make it difficult to spot objects/edges. The brightness of an image is computed by converting it to a grayscale histogram and calculating the average pixel brightness. The resulting average score is then normalized to the 0-1 range based on the [0,255] limits of grayscale values.

Below are some examples of images and their corresponding normalized brightness scores.

These metrics look at the label and annotation information. This calculation requires images with GroundTruth(GT), whereas the other two do not necessarily need GT. The extra information must however be supplied when calling the script, as explained in the readme.

The data used in this section comes from a combination of public and internal datasets, and the label and annotation information are used to inform metric definitions and thresholds for the overall complexity score. A total of 181 datasets and over 100,000 images are accessed.

Number of Labels in the task

No. of Annotations Per image

The expected number of objects to be annotated per image affects its complexity, especially in terms of how long it takes for a lead to be completed.

Total number of annotations per image

50% of these had 2 or fewer annotations, whereas 75% had no more than 8 annotations. There are a large number of outliers beyond the outer boxplot whisker which lies at about 20 annotations. Using these figures, the following brackets are set:

Here, researchers  were asked to rank fives types of annotation projects in increasing order of difficulty. The general consensus was as follows, with the corresponding difficulty level:

In the next post we will go through the rest of the method. Stay tuned for part 2! 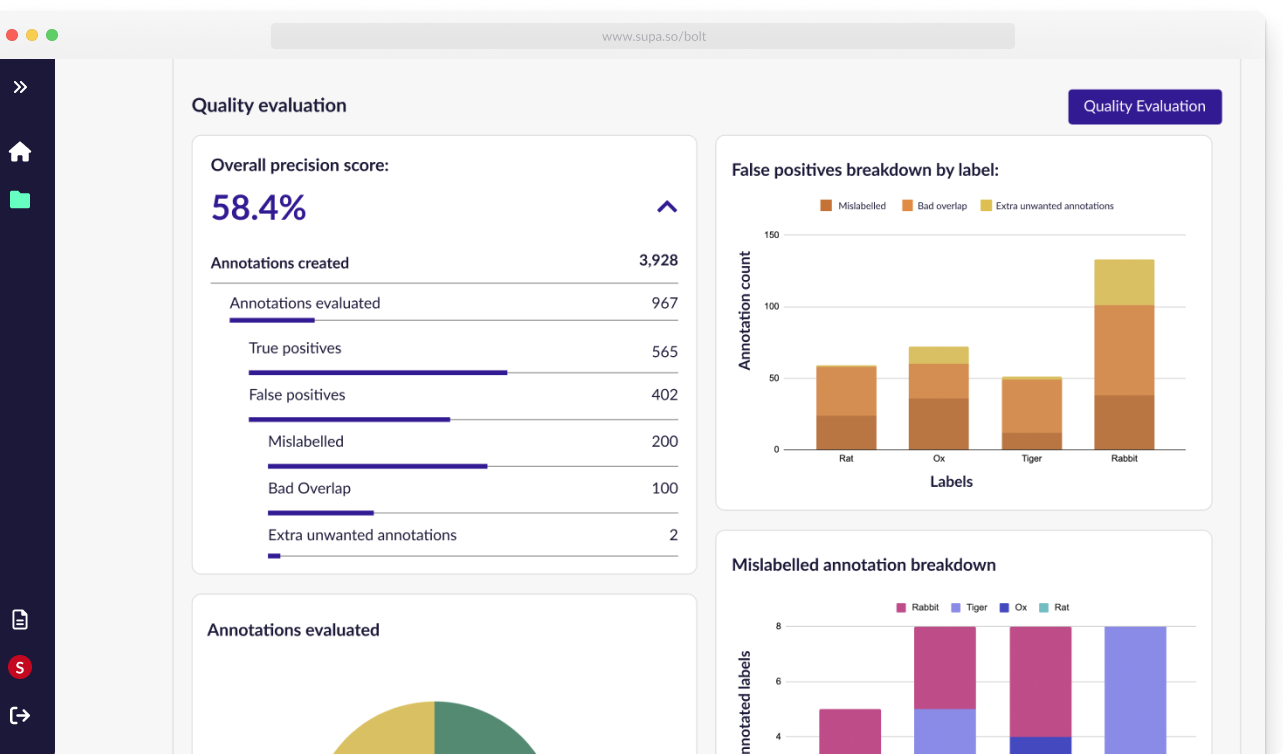 Start an image annotation project now with $50 credit on us.

Level up your data-centric AI journey with quality insights.

Get insights to turn label noise into trusted and usable data. Level up your data-centric AI journey with quality insights.

BOLT vs CVATBOLT vs AWS MTurk